The GA-Z370N-WIFI offers a wealth of connections and features including USB 3.1 and a choice of three monitor connection standards - DVI and two HDMI ports, with one of the HDMI ports being HDMI 2.0, meaning 4K at 60Hz! 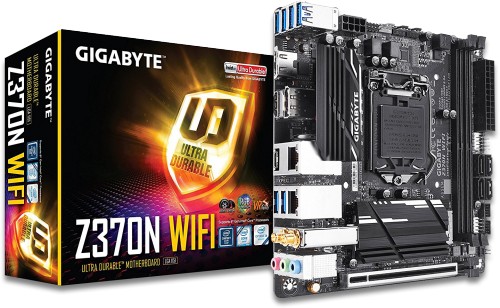 Achieve fan silence. With Fan Stop map any fan to stop completely when temperatures drop below a specified threshold. Which fan stops, based on readings from which sensor, and at what temperature all of it can be customised to your liking.

The ALC1220 is a high-performance multi-channel High Definition Audio Codec with up to 120dB SNR for crystal clear audio and features such as Smart Headphone Amp, 114dB SNR recording for precise voice chats and hardware decoding of DSD128, ensuring users get the best possible audio quality from their PC.

Automatically detects impedance of your head-worn audio device, whether earbuds or high-end headphones to provide optimal audio dynamics preventing issues such as low volume and distortion. 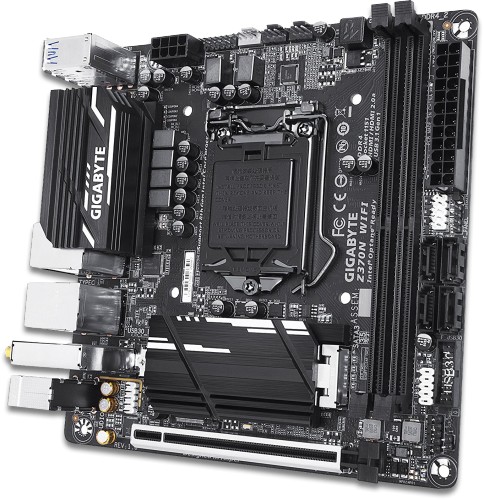 GIGABYTE Motherboards are focused on delivering M.2 technology to enthusiasts who want to maximise their system’s potential.

With durability in mind, GIGABYTE provides a thermal solution for M.2 drives Thermal Guard. The M.2 Thermal Guard prevents throttling and bottlenecks from M.2 devices as it helps to reduce and dissipate heat before it becomes an issue.

HDMI 2.0, which is backwards compatible with HDMI 1.4, offers 18 Gb/s of bandwidth – nearly twice that of the previous generation. This unlocks the potential for users to transfer multiple video streams, as well as a native cinematic 21:9 ratio (which most movies are shot in), offering the best visual experience for viewers.

The onboard 802.11ac WiFi module from Intel supports up to 867 Mb/s wireless networks and BLUETOOTH 4.2. The bonded 2.4GHz/5GHz Dual Band and 2T2R antenna expands your coverage.

GIGABYTE is offering a tested and proven platform that ensures proper compatibility with profiles up to 4400MHz and beyond. All users need to do to attain this performance boost is to ensure that their memory module is XMP capable and that the XMP function is activated and enabled on GIGABYTE motherboard.

With Z370 Motherboards, RGB Fusion is even better with Digital LEDs.* RGB Fusion offers users the option to control onboard and external LED light strips for their PC. Already feature filled with colors and patterns, RGB Fusion on Z370 Series Motherboards are now upgraded with Digital LED support. With onboard options and external digital LED strips*, where each LED is digitally addressable, users can experience even more patterns, styles, and illuminations.

Don’t just make your PC shine, make it a work of art that friends will envy. With the GIGABYTE RGB Fusion mobile app users can watch as they control the lighting within their gaming PC. This gives users ease of access as they try and adjust colors and speeds for different modes, all this can be achieved away from the keyboard and monitor of their PC.

“High quality components for all budgets”

“As I bought a lower end product for a very good price I was half expecting it to be cheap and nasty but I was very wrong. The heatsink and fan that I now have running in my home PC is very quit and keeps the CPU cooler than the stock heatsink and fan ever did. Whatever your budget, Quietpc.com will have the right parts for you!”